April 05, 2018
Brief Description :
Access teams provide a way to share records between different functional teams without having to change or update the base security rule in Security roles. Access teams does not mean ownership of the record. The record is only shared so that other users can work on it.

Step 1:
There are two business units “Sales India”  and “Sales US”

Step 2:
Tom is a part of “Sales India Team” and Harry is a part of  “Sales US Team”.
Step 3:
Assigned both the users a custom role in which they can do the following as shown below

Step 4:
Now to enable access team we must navigate to entity for which access teams needs to be enabled as shown in figure below
Here we go to Accounts entity and enable Access Teams then to save the changes made publish all the customization. Step 5:
To use access teams we first create an access team template by navigating to Setting > Security > Access Team Templates
Step 6:
Here create a new template with an appropriate name and select the Access Rights and the Entity as shown in the figure below.
Note:The entities field on which Acess Teams are enabled only those entities will be shown in the Entity field dropdown.
By adding users, you are granting them the access rights to that record that are defined within the access team template, even if their base security role does NOT grant them those rights. Note, the access rights are ONLY being granted for that specific record.

Step 7:
Now we add a Sub grid on the Accounts main form so that the users can be added to the access team on the fly. 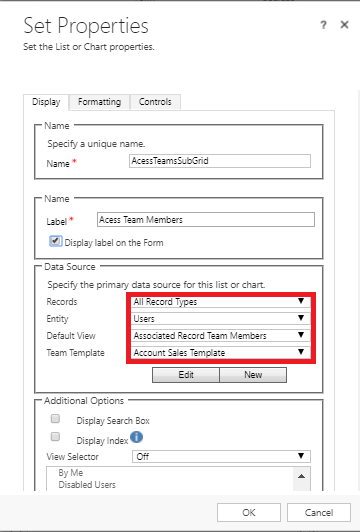 Here in the Team Template field select the template made for the access team. After setting up the subgrid Save and Publish all the Customizations.
Step 8:
Harry is the owner of two records(Crook Motor Company & Lamborghini) as shown below.

Step 9:
Harry can view every record in the organization but cannot write/edit. As seen below harry can only read record created by Tom.

Step 10:
Now as harry wants to write/edit this particular record, the admin has to add him in the access team sub-grid to give him access to write to this record.

Step 11:
Now Harry can write/edit to that particular record as shown below.

Popular posts from this blog

August 01, 2017
While working with Dynamics CRM Plugins, the thumb rule for Plugin Registration is: If you are working with CRM On-Premise, use Plugin isolation mode as  None. If you are working with CRM Online, use Plugin isolation mode as  Sandbox. So, now the scenario is you are working on big implementation for CRM On Premise. Now your organization decides to move to CRM Online. The first task comes to mind is to move all the Plugins to Sandbox mode and see if they are still working considering running Plugin in sandbox comes with some  limitations  (such as you cannot access file system/registries/external assemblies/protocols/IP Addresses etc). To convert the Plugin assemblies to Sandbox mode, one option is to open Plugin Registration tool and convert the assemblies one by one which is a tedious task. The other simple option is do this by Customization.xml file. Below are the steps how to do that. Create a solution with all Plugin assemblies or use existing solution if already a
Read more